The Benefits of Quarantine (A Book Update) 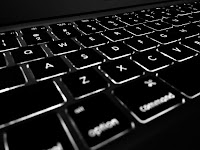 If you had told me in January that I'd hand in all of the materials for my fourth book during Holy Week, I'd have laughed. One of the busiest weeks in a pastor's life, and I'd be able to say I was finished writing then? I would have thought that to be an absurd notion back at the beginning of the year.

A lot of things seem absurd now. Like gathering in large groups. And eating at restaurants. And standing next to people.

But that's also the reason why I was able to finish things when I did. My drastic change in schedule afforded me some extra time to work on it, and I also wanted to keep to a daily routine so as not to just sit on the couch mindlessly scrolling Facebook and Twitter for 12 hours a day. These two things combined allowed me to turn things in well before my deadline, and it happened to coincide with what is usually a frantic week.

So now I'm at the stage where I do a lot of waiting. Eventually there will be edits, and then more waiting. I am still hoping for a 2020 release. When I know more, I'll provide another update.

In the meantime, check out the books that I've already written. And I also provide such updates and other things in my monthly newsletter.