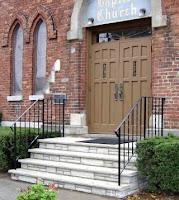 This post from May 2011 is one of my favorites. It captures the essence of what pastoral ministry has been for me: an imperfect mix of hope and frustration in relationship, with Jesus present in all of it.

He turns back and continues his walk. I only watch for a moment before knowing that I need to get home to my own family. I make my way across the empty parking lot to my car, taking my time as the remnants of the morning evaporate.
By Jeff Nelson
Email ThisBlogThis!Share to TwitterShare to FacebookShare to Pinterest
Labels: Vintage CC
Newer Post Older Post Home