Changing Our View (A Book Excerpt) 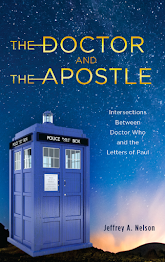 Below is an excerpt from The Doctor and the Apostle: Intersections Between Doctor Who and the Letters of Paul.
In his popular work The Screwtape Letters, C. S. Lewis imagines a series of letters written by a demon named Screwtape to his nephew Wormwood, who is on assignment to tempt and corrupt a particular human. In one of the earliest letters, Screwtape expresses his dismay that Wormwood’s subject has converted to Christianity and promises the usual punishments for such an egregious development.
Shortly after, Screwtape advises his charge on several ways that this may turn out to be useful to their efforts. And one of their chief allies in winning the man back, Screwtape says, will be the church itself. Their human subject may go through the usual passion and joy that comes when someone initially embraces the faith . . . but then they’ll actually begin participating in a faith community, and this is where it may begin to fall apart. Why? Because he’ll actually start interacting with other people.
Screwtape writes:

When he goes inside, he sees the local grocer with rather an oily expression on his face bustling up to offer him one shiny little book containing a liturgy which neither of them understands, and one shabby little book containing corrupt texts of a number of religious lyrics, mostly bad, and in very small print. When he gets to his pew and looks round him he sees just that selection of his neighbors whom he has hitherto avoided. You want to lean pretty heavily on those neighbors. Make his mind flit to and fro between an expression like “the body of Christ” and the actual faces in the next pew. It matters very little, of course, what kind of people that next pew really contains. You may know one of them to be a great warrior on the Enemy’s side. No matter. Your patient, thanks to Our Father Below, is a fool. Provided that any of those neighbours sing out of tune, or have boots that squeak, or double chins, or odd clothes, the patient will quite easily believe that their religion must therefore be somehow ridiculous.

Screwtape’s working theory is that once their subject bumps up against the imperfections and sins of other actual human beings, he’ll lose his fervor and drift away from the entire Christian enterprise. He’ll be tempted to give up and turn to other belief systems, or no particular system at all, to guide his life instead.

The Doctor faces this temptation on occasion. As often as they profess a belief in humanity’s goodness and potential, there come instances when they are disappointed by specific choices that people make. For every time The Doctor is inspired by meeting great historical figures such as Vincent van Gogh, Nicola Tesla, or Rosa Parks, or expresses appreciation for something that their companions do to get them all out of trouble, there also come moments such as when Rose disrupts time or the prime minister orders an unnecessary act of violence.

When these later moments come, The Doctor sometimes wrestles with doubt about why they keep helping, why they keep inviting people onboard to see incredible things, why they keep returning to Earth. Why would they continue spending time with the pudding brains?

Paul becomes exasperated with his churches as well. He knows that they know better; he often wants them to act like it. But sometimes he can’t help himself and unloads his frustration in his writing, calling them stupid and wondering why he keeps making the effort.

But both The Doctor and Paul know that there’s more to the story than humanity’s inevitable propensity to mess things up. For The Doctor, it’s that potential that they keep mentioning: for every letdown, there’s always the possibility that humanity can do amazing things for themselves and for others. And The Doctor has the added benefit of knowing what happens in the future; the ways that individuals and groups keep striving for new accomplishments and advances; how they keep trying to reach beyond themselves toward something greater, even if they won’t be able to reap the benefits themselves. In the episode “The Lie of the Land,” companion Bill Potts asks The Twelfth Doctor why he keeps putting up with humanity. The Doctor answers, “In the midst of seven billion, there’s someone like you.”

Paul believes something similar. Even if he sometimes voices how exasperated he is by something happening among his people, he much more often mentions how glad he is to hear about their faithful work, their perseverance, their deepening of understanding, their bearing of each other’s struggles. He encourages them to continue striving for these greater acts of community and discipleship as best they can, even knowing that their best sometimes will fail.

After all, for Paul there’s still God’s grace. People may not always behave graciously. They may not always act as if they’ve truly died to an old destructive way of life while embracing the gift of resurrection. That gift is nevertheless ever present, from one flawed moment to the next, because even God intends us for better, life-giving things.

The Doctor and Paul sometimes have trouble seeing it. And as Lewis observes through Screwtape, we may have the same problem. For all that we hope and imagine for ourselves and for our neighbors, we’re really good at getting it wrong. We seldom live up to the wonderful ideal image that we carry about humanity in our minds. But God keeps showing up, and in the times when we remember and live into that truth, we may be transformed a little bit more.
The Doctor and the Apostle: Intersections Between Doctor Who and the Letters of Paul is available at Amazon and Wipf and Stock in paperback and electronic formats.
By Jeff Nelson
Email ThisBlogThis!Share to TwitterShare to FacebookShare to Pinterest
Labels: Bible, Book Stuff, Church, Pop Culture Commentary
Newer Post Older Post Home