The Doctor and the Apostle: Intersections Between Doctor Who and the Letters of Paul 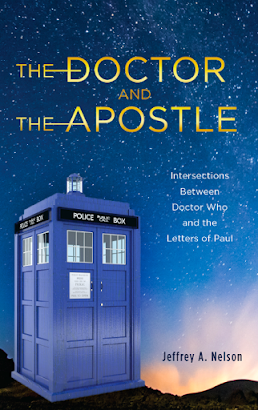 Now available on Wipf and Stock and Amazon!

What could a 1st Century church planter and tentmaker who helped forge the earliest years of a new religious movement possibly have in common with a British time traveling alien who first appeared in the 1960s to teach children about history?

Doctor Who has been a beloved science fiction franchise for over 50 years. Paul’s letters have been around for quite a while longer, with the earliest ones that he wrote dated less than a generation after the life of Jesus. Both have inspired and instructed people on how to live and have stoked the imagination for what individual and communal life can be in their own way. And both were or are deeply flawed, sometimes struggling against their own tendencies or those of others in order to help bring about something greater for their respective worlds.

The Doctor and The Apostle explores the similarities and differences between Doctor Who’s title character and Paul of Tarsus, comparing and contrasting the stories of each. Whether a fan of one or the other or both, the reader will gain a greater understanding of the possibilities of a life of faith, as well as a deeper appreciation of how pop culture and scripture may help inform one another.

...fans of Doctor Who interested in an analysis of themes from throughout its 50+ year history...

...non-fans nonetheless curious about the show's relevance to modern spiritual and social issues...

...spiritual seekers who'd find the interpretation of a TV show more accessible than of Biblical texts...

...those interested in learning more about the life and writing of the Apostle Paul...

...Christians and non-Christians alike who have found Paul problematic but might be open to a new and different take on his theology...

Praise for The Doctor and the Apostle:


"In this book, Jeff Nelson answers the question a select few have longed to see answered: what happens if you compare the lives, activities, and values of the Doctor and the apostle Paul? For those who never thought to ask this question, his book is all the more interesting and valuable, since it opens up fascinating avenues along which you'll better appreciate your faith and fandom -- whether as a Whovian, a Christian, or both -- and at the same time be led to ask new questions that will deepen your understanding of stories and/or letters that you think you're familiar with." -Dr. James F. McGrath, Clarence L. Goodwin Chair in New Testament Language and Literature, Butler University
“Jeff Nelson’s The Doctor and the Apostle left me with a deeper appreciation of Doctor Who and a better understanding of the Apostle Paul—both of which I have complicated relationships with. Nelson’s unique approach to the intersections of pop culture and the Christian understanding of the Christian Biblical Canon will enable you to peer into the similarities of science fiction and scripture. I’m sure you will find yourself in the pages of this book in ways you hadn’t thought possible, it’s worth your time.” — The Rev. Robert W. Lee, Author of A Sin by Any Other Name: Reckoning with Racism and the Heritage of the South
"If you could take the Tardis to Tarsus, what would you learn? If this question has you intrigued, Jeff Nelson is your trustworthy guide. A feast for Doctor Who fans, and a generative space for students of the Apostle Paul, this book lives up to its claim to mine the intersections of history, culture, ethics, and faith in ways that make both the show and the Bible more relevant and fun for every day life." - Rev. Dr. Deborah Krause, President and Professor of New Testament, Eden Theological Seminary
"You don't have to be a fan of, or even familiar with, Paul or Doctor Who to appreciate these well-told stories of two imperfect, traveling helpers who rely not only on their own leadings and wisdom, but also on learnings from their companions as well as their opponents.Be prepared to see connections between Galatians and Cybermen, and resurrection and regeneration; nuances of gender roles, and jargon-free discussions of Paul's own writings and later additions." - Jonathan H. Hartwell, Rollins College, co-editor of Theology and Prince
By Jeff Nelson
Email ThisBlogThis!Share to TwitterShare to FacebookShare to Pinterest
Labels: Book Stuff, Pop Culture Commentary, Writing, Writing Elsewhere
Newer Post Older Post Home