And Then It All Just Stopped 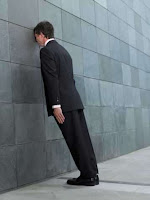 I didn't mean to take a two-week break from blogging and podcasting.
I couldn't fully tell you why or how it happened.
I recorded and posted my Aw, Hell episode...and then I just didn't have anything to follow it up with. No words to write or to speak. A blank page, and a blinking cursor mocking my lack of motivation.
After that came a long weekend due to Memorial Day, which gave me enough of a justification not to try to break through the creative wall. When you have an excuse, it's easier to remain comfortable in your lack of production.
Austin Kleon provides one solution to this sort of creative problem:

Something that works better for me, especially since I draw and make visual art, too, is: “Just make something, anything.”

This is something a creative director said to me when I worked in marketing: Move from idea to manifesting the idea in some object as soon as possible. Doesn’t matter if it’s a shitty sketch on a napkin, or a model out of toothpicks, or a paragraph typed into the Notes app, or whatever it is, the important thing is to make some thing. When you have the thing, it’s out of your head and you can look at it for what it is, figure out what it needs to be.

There come times when you just need to stop and recharge, to take a break and see what sorts of new things pop up when you're not trying to force genius from fumes. In other moments, however, you need to just put pen to paper or fingers to keyboard, start something, and see where it leads.

The Aw Hell, There's More episode was the result of the latter. But there's definitely time for the former as well. In fact, it may have been the former that led to the latter. Creating is strange and complicated like that.

Anyway, things should be back to some semblance of a normal routine around here now. Thanks for reading and listening.