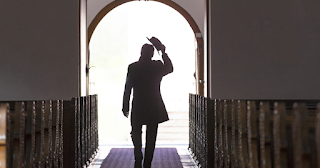 In early 2020, I submitted my resignation to the church I was serving as pastor to take a position on my denomination's national staff. The work that I do now--providing oversight and guidance to the various processes of ministers transitioning from one vocational season to another--is the type that I'd been discerning for almost as long as I was serving in churches. It did not take long for me to pick up on how challenging, how emotionally and spiritually taxing, serving in ministry can be. Eventually, I wanted to support others in their work in the same way I had found various networks of support in mine.
I do plan to write someday about the specific factors that led to my transition out of being a pastor. I don't yet have the words to adequately name them. But for the purposes of this post, I'll at least name that burnout played a major role. The pillars that keep a church standing are many. If you're lucky, you can just lean against them and they'll hold without effort. Or at least you could in a bygone era.
At other times, however, you need to turn your attention away from the pillars themselves toward what may cause them to crumble, doing your best to shoo them away or frantically applying new cement where those pillars have already taken damage. In either case, there came a point where I ran out of cement, or energy to keep applying it, or both. It was finally time to try my hand at a different kind of ministry with a different set of pillars.
Of course, many are still at that work, plying their trade day in and day out to keep those pillars standing. I count many friends among those faithful who are still seeking a word from God to speak into anxious hearts every week, who are tending to fragile situations of loss, who are sitting at meetings to organize soup kitchens and food pantries and disaster response. I have held them in prayer every day since leaving their ranks, and by that same prayer seek ways through what I do now to support them.
Given the nature of my particular work with ministry transitions, I've been asked many times over the past year about what I've seen regarding how many ministers have moved on during the pandemic. This question reflects a curiosity about how many ministers have dared to go through the process of changing positions during a time of physical distancing and quarantine, when saying goodbye and getting to know a new set of people are both much more challenging.
In more recent months, however, this question also carries another concern: how many are giving up ministry entirely?
I made this question the subject of a statistical analysis a few months ago, focusing on the number of ministry departures recorded in my denomination's data hub system. I took the number that have happened since March 2020 up until April 2021, and compared it to the prior 5 years. Interestingly enough, the number wasn't that different. In fact, the number of ministry departures during the pandemic in the UCC was actually lower than some previous years.
That's not to say that people in ministry haven't been considering it. It might just be that many haven't yet set their thoughts into motion.
Many other professional spaces are currently experiencing what analysts are calling The Great Resignation. A recent survey found that 55% of working people expect to leave their current places of employment to work elsewhere over the next year:

Due to the pandemic, people's needs are changing. They're also feeling more empowered to find positions that are better for their health, lifestyle, and aspirations. They might not have felt bold enough to do so before March 2020, but so many have decided that they no longer want or have to put up with the demands and conditions of their current work environment.
It makes sense to think that a decent amount of clergy make up that 55% of people looking to make a change. I expect an analysis of my denomination's stats a year from now to look much different from what I've found thus far. I've heard so many anecdotes about ministers who have already left or who are heavily considering leaving, who are discovering their own points where holding up the pillars of a ministry institution has worn them down too much.
This may not have been the case before 2020. No church is perfect and most experience conflict on some level, and clergy have had to tend to their own needs during and after. Arguments over music, social justice, building maintenance, and finances have always been present.
But unfortunately, the pandemic has injected this "routine" Church Drama with steroids.
In the age of COVID, clergy have been facing added pressure of holding a community together, learning new skills, taking on additional tasks, fights over safety guidelines, increased member meanness, struggles with self-care, and dependable volunteers opting out themselves. Not only are there more pillars, but there are more wrecking balls swinging at them threatening to take them down.
People in ministry are exhausted. Many are questioning whether this is worth it any more, between a heavier strain on resources, the impatience and anxiety of one's congregation, and a neglect of one's own needs for renewal.
And their discerned solution might not be to change from one church position to another, but to opt out of this work altogether. Many may explore non-parish work, other non-profit work, or something else entirely. If the weekly responsibilities of pastoring felt like a grind before, they certainly do now. And many who dedicated themselves to it with joy and faithfulness may be losing what used to sustain them.
Are churches and other ministry settings ready for their own Great Resignation? Are denominations? Will it be enough to realize at this point that something like this is coming? I wish I knew. Nevertheless, as we continue to move through this time, a lot more pillars may need tending.
(image source)
By Jeff Nelson
Email ThisBlogThis!Share to TwitterShare to FacebookShare to Pinterest
Labels: Church, Ministry, My Journey (so far), United Church of Christ
Newer Post Older Post Home