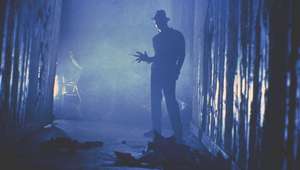 Previously: Introduction
My first week of slasher franchise October horror movie viewing is complete, and it involved a lot of gloves enhanced with blades. Here's what I watched this first week.
1. A Nightmare on Elm Street (1984) - Freddy Krueger begins his time of terrorizing teenagers (including Johnny Depp) and killing them in their sleep. I honestly found it a bit silly. I'm sure people thought this was scary in the mid-80s, but it was pretty tame.
2. A Nightmare on Elm Street 2: Freddy's Revenge - A new family moves into the same house as the first movie, and this time Freddy tries to enter the real world through the teenage son, Jesse. I definitely saw why this movie is a cult classic for its homoerotic undertones.
3. A Nightmare on Elm Street 3: Dream Warriors - This time around, Freddy terrorizes a bunch of teens in a mental hospital, and they all learn to fight him together using "dream powers." Patricia Arquette and Lawrence Fishburne are in this one, and the effects are getting better.
4. A Nightmare on Elm Street 4: The Dream Master - Freddy is still mad about what the Dream Warriors did, so he comes back to get revenge on them. Fortunately, a new character is able to fight back on his own turf. The dream sequences and camera work were pretty creative in this one.
5. A Nightmare on Elm Street 5: The Dream Child - So now Freddy wants to get back at Alice, aka the "Dream Master," and decides one way to do it is to make her have his baby. Parts of this one were legit creepy. At this point in the series, I also have to give credit where it's due for these movies telling a continuous story, rather than Freddy randomly terrorizing new groups of people like some other horror franchises.
6. Freddy's Dead: The Final Nightmare - The franchise kind of circled back around to silly here, except on purpose this time. It decided to be over-the-top zany, which I can appreciate in horror movies. I have to admit that I chuckled more than once, but I don't think they always meant for me to.
7. Wes Craven's New Nightmare - Here the franchise goes meta, as Freddy actually tries to break into the real world while tormenting cast and crew members from other Elm Street movies. I don't like the Creepy Possessed Child trope, but otherwise this was a good entry.
(image source)
By Jeff Nelson
Email ThisBlogThis!Share to TwitterShare to FacebookShare to Pinterest
Labels: 31 Halloween Movies, Pop Culture Commentary
Newer Post Older Post Home