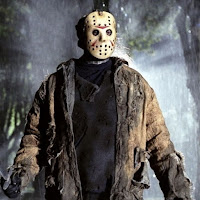 Previously: Introduction, Week 1
After a week of Freddy Krueger last week, this week was all Jason Voorhees. And I still have more in this series to watch! Here's what I saw this week.
8. Friday the 13th (1980) - A group of newly hired counselors (including Kevin Bacon!) help get Camp Crystal Lake up and running again...until an unseen assailant starts killing them all. This movie's creepiness holds up, thanks to the camp setting and the pathology of why Mrs. Voorhees (spoiler?) does what she does.
9. Friday the 13th Part 2 - Here's where we start to get Jason as the killer, though not quite yet in the form everyone recognizes him in. He's really mad about his mom dying and decides to take it out on another group of camp counselors. Jason with a burlap sack over his head was scarier, I think. He's also not the stoic, impervious-to-pain version we get later, which adds some depth to what he does.
10. Friday the 13th Part III - Here we finally get Hockey Mask Jason, who borrows his signature face covering from one of his victims while he torments a group of young adults at a vacation home. This installment was also released in 3-D, so we get lots of things shoved at the camera. Aside from a few creatively gruesome kills, this one was underwhelming.
11. Friday the 13th: The Final Chapter - Jason survives a machete to the head--because of course he does--so he can go back to his woods and stalk a fresh group of people (including Corey Feldman and Crispin Glover). The ending was pretty...thorough, since this was meant to be the last one as the title states. But franchises like these find ways to keep going.
12. Friday the 13th: A New Beginning - Tommy, the protagonist from Part 4, now lives in a psychiatric residential facility and has nightmares about Jason. So when a killer in a hockey mask shows up, he understandably freaks out. It turns out that this new killer is a copycat and not actually Jason, since the last movie and this one establishes that he's definitely dead. The mental health angle had potential, but the goofy/campy/raunchy stuff ruined it.
13. Friday the 13th Part VI: Jason Lives - Tommy's back one more time to unnecessarily dig up Jason's body, and thanks to a well-placed lightning strike, he unintentionally raises him from the dead. So now Jason is super strong and can't be killed by normal means. The deaths become more outrageous and there's some good intentional humor.
14. Friday the 13th Part VII: The New Blood - A teenage girl with psychic and telekinetic abilities (sure, why not?) accidentally releases Jason from the bottom of the lake, he comes up and kills a bunch of people in gruesome ways, she eventually defeats him with her powers. Adding more supernatural elements was fine, but there wasn't much else that differentiated this from the others.
(image source)
By Jeff Nelson
Email ThisBlogThis!Share to TwitterShare to FacebookShare to Pinterest
Labels: 31 Halloween Movies, Pop Culture Commentary
Newer Post Older Post Home